The Rotterdam Building is located at the junction of Coolsingel and Lijnbaan in the heart of Rotterdam. The location is dynamic, lively and buzzing with energy. Yet in recent years the building has been largely vacant. Overdue maintenance and its introverted character made it difficult to rent out.

Kraaijvanger Architects was asked in 2020 to transform this design from its own oeuvre into a building with multiple office units. This would reinforce the qualities of the original design and the interventions would also contribute to making the building future-proof.

Kraaijvanger's oeuvre is extensive, more than 300 designs were realized in Rotterdam alone. This repertoire includes several monumental and well-known buildings. But the designs from the 1970s are underexposed and much less known. The Rotterdam Building is an example of a somewhat invisible design in the inner city of Rotterdam. Further historical research (in collaboration with Steenhuis Meurs) reveals an enormous ambition in the design. In terms of building volume, the design conforms to the surrounding buildings. At the completion, the then project architect Ben Kraaijvanger recalled in his speech that it was an ambition to bring the allure of Manhattan to Rotterdam with this first high-rise project on the Coolsingel. But the design means much more in Kraaijvanger's oeuvre. It is the first project in which a flexible floor plan was developed. By projecting the installations on the facade side and including a division of 1.25m1 in the facade, ceiling and inner walls, future adaptations were made possible. 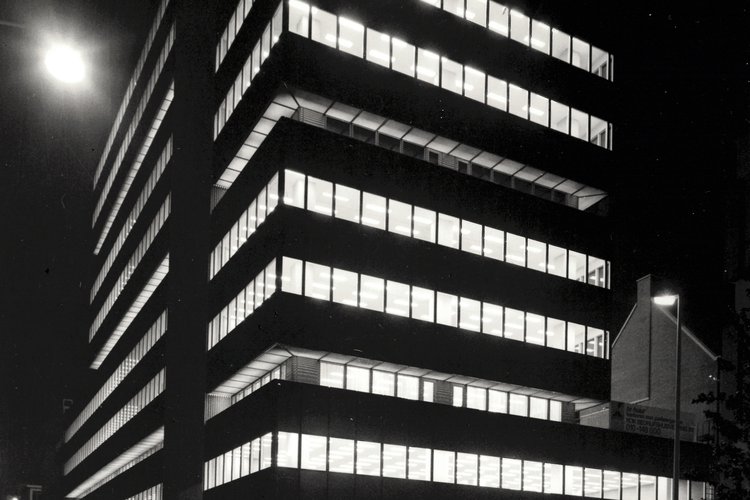 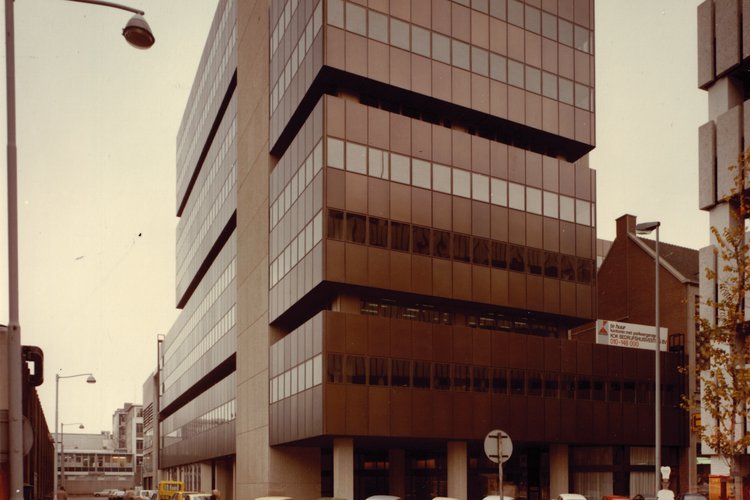 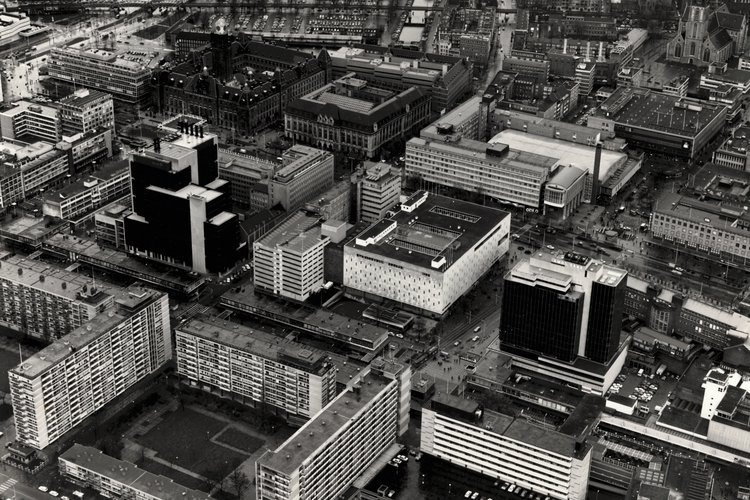 The facade design was Kraaijvanger's first experiment with an element facade. The layering and technique were experimental. The detailing was refined, showing a clear mastery over all scales. Despite the high level of the original design, the hospitality concept proved not so timeless. The way the office building received its clients in the functionally designed lobby does not fit with current office concepts. Also, the lack of a connection to the public domain made the building introverted and distant. Potential tenants miss the feeling of renting an office in the downtown area of a bustling city. The intervention proposed by Kraaijvanger Architects is to make the lower floors a transition from the public city life to the intimacy of the office environment on the upper floors.The new design is based on replacing the closed façade on the 1st floor for an open and transparent façade. Also, the façade on the first floor is shifted towards the street so that program and dynamics connect with the pedestrian flow on the Aert van Nesstraat. Inside, a new grandstand staircase provides a connection to the grandeur of the lower three floors. The new program is enhanced with accessible outdoor spaces. The green character of the outdoor spaces make them new places to stay. Finally, the 14th floor will be furnished with a sky bar where a beautiful view over Rotterdam West will arise. In good weather, even Hoek van Holland can be seen here. 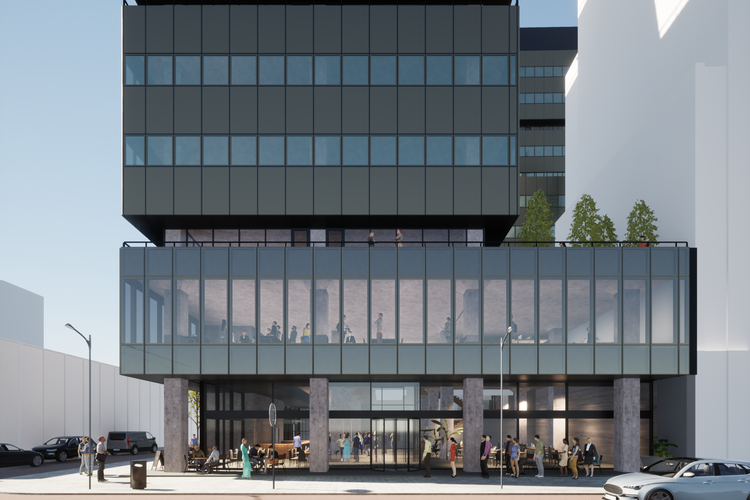 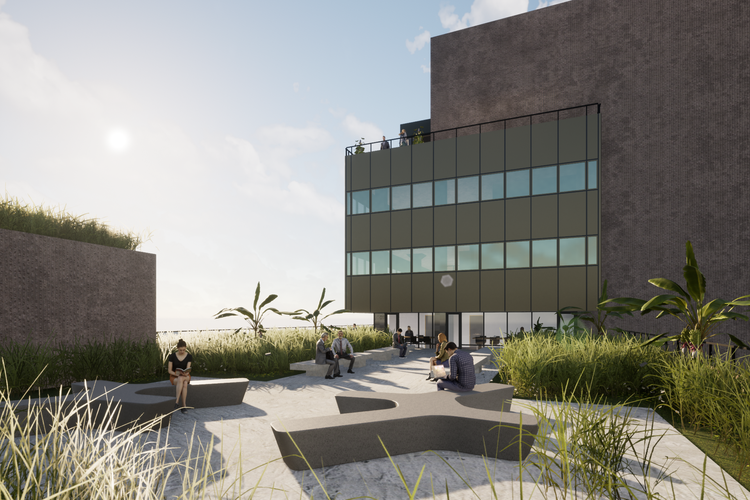 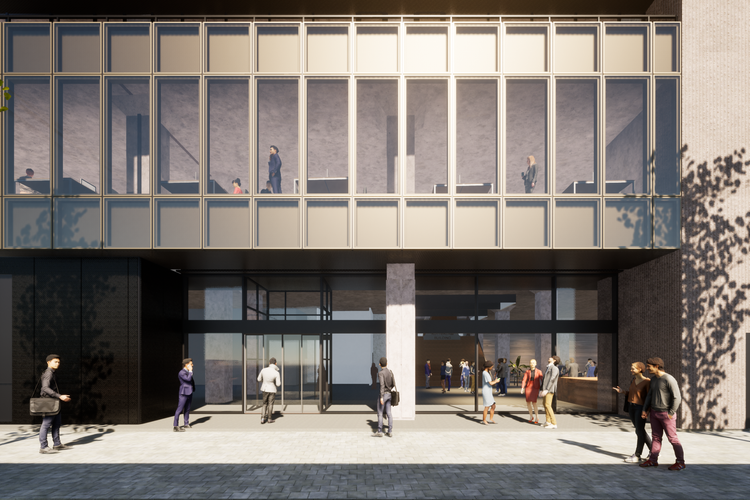 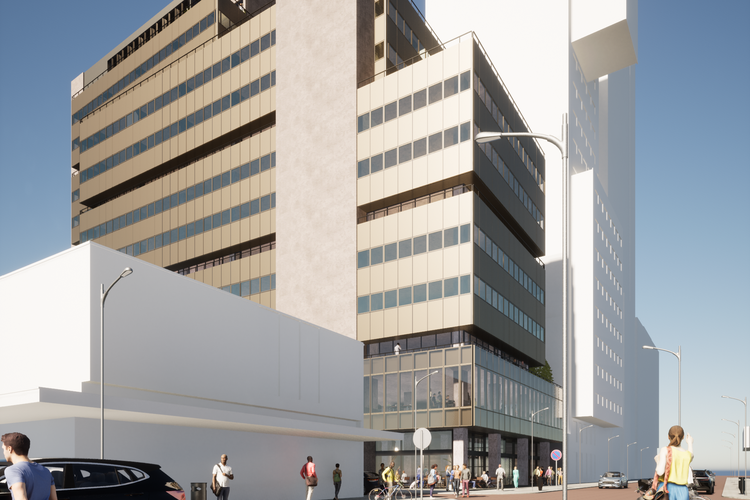