In our design, the so-called 'waterfall' from Van den Broek and Bakema's design is replaced by a new waterfall. An intervention that makes the building more prominent and offers extra space for being a 'living room for the city'. A place not only for books but also for experience and involvement. By taking the current building as a starting point and reinforcing it with an extension that enters into a dialogue with the design by Van den Broek and Bakema, a renewed and intriguing ensemble is created. The new waterfall stands for the library of the future. A place where everyone is always welcome and feels at home.

Snøhetta:''In our proposal for the renewal of the Central Library Rotterdam, we made the story embedded in the old building the main character.''

Much has changed since the opening of the original building. The urban context is dominated by high-rise buildings and the enormous size of the Binnenrotte. The crumbling structuralist form is characteristic and we consider it to be worth preserving. But it also means that the building does not manifest itself on the Binnenrotte and has become anonymous and inconspicuous. The introduction of the new waterfall at the location of the current entrance brings the building fully into the limelight. Coming from Blaak Station there is no doubt about where to go. A dialogue is created not only between the new waterfall and the city, but also between the new waterfall and the existing building. The library becomes richer and more complex. Mindful of the adage; city within the city. The development in a vertical sense symbolizes the building as a vertical city. It provides an enormous dynamic to the Binnenrotte that lacks this urban space. From the Binnenrotte a clearly visible entrance for the bicycle storage is designed next to the building. The ground level with greenery, which frames the entrance downwards, and where upon entering one comes into contact with the foundation on which the library rests; the Erasmus collection on display.

By removing the waterfall and transforming the void in the existing building into a new spatial green heart, the building opens up and reveals itself to the visitor. This offers unprecedented possibilities. The existing building is preserved in its essence and will be renovated. With respect for the character and maintenance of the original qualities. Such as accommodating the collections and making them accessible. The new waterfall, on the other hand, reveals itself to the city as the embodiment of the renewed library. With opportunities to stay, meet, develop and inspire.

In and around the atrium, visitors move between the existing and the new building sections. These remain clearly distinguishable by the robust finish of the concrete building, where the saw cuts from the opening are still visible, and the warm wood of the new construction. Despite the differences in character, the new building sections form a whole, also visually with, for example, a wooden railing around the atrium that weaves the sections together. In the existing building, visitors can learn from books and make use of other specific functions, whereas the new building section offers space for learning from - and with - each other. The existing building is full of books, the new building section is full of conversations. Both parts cannot do without each other, where knowledge must be discussed and conversation must be fed with knowledge. The constant interaction between the building parts, which continues over the different floors, is the center of the building. 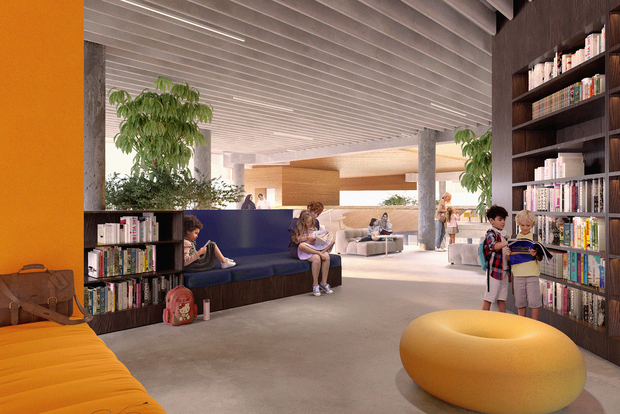 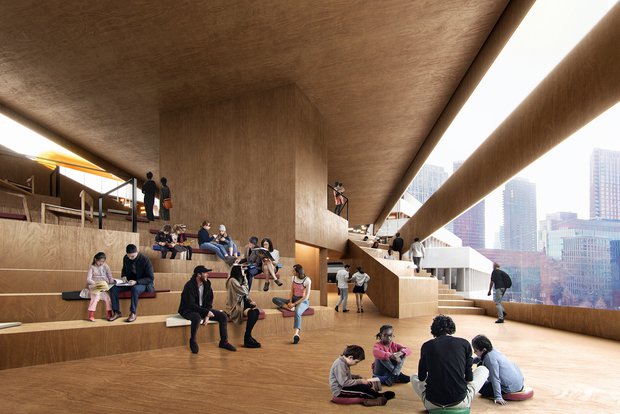 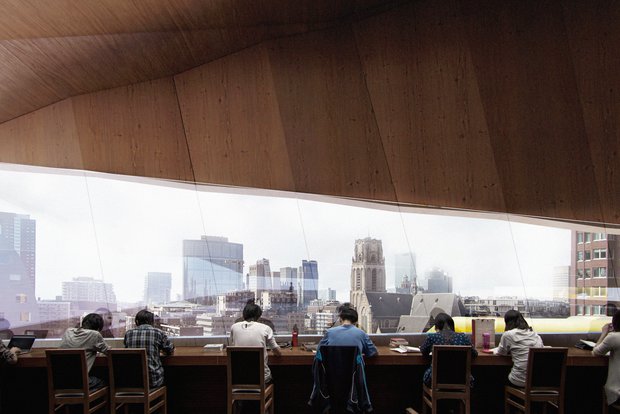 Living room of the city

The visitor not only moves upward in the new waterfall, but also moves horizontally across the entire floor. Thus, the user moves upwards in a kind of spiral through the entire building. In the process, the user encounters various places to stay in order to gain knowledge, meet people and have fun. Both on the first floor where there are seats, greenery and the chessboard, and the seating areas around the atrium on the floors. In the new tower you will find the 'amphitheater' for meetings and lectures. At the very top is the 'hut'; the public living room of the city. In this intimate, here there is room to sink down with a book and relax and meet each other around a fireplace. The library has many small places, in the form of alcoves, but also a large reading table. At the large reading table you can read the newspaper separately but still connected with each other. The alcoves function as a kind of mini-harbors, safe but still open to the rest of the library, the harbor. These home ports are always close to the books so that everyone can find the peace and quiet to research, study and work. The renovated library is thus a 'third place' where the diverse Rotterdammer can find his/her own place in the building where he/she needs it at that moment.

Hans Goverde, Architect and Partner at Kraaijvanger: ''We have looked at the design with a new perspective, giving a new view of the building while respecting the existing.'' 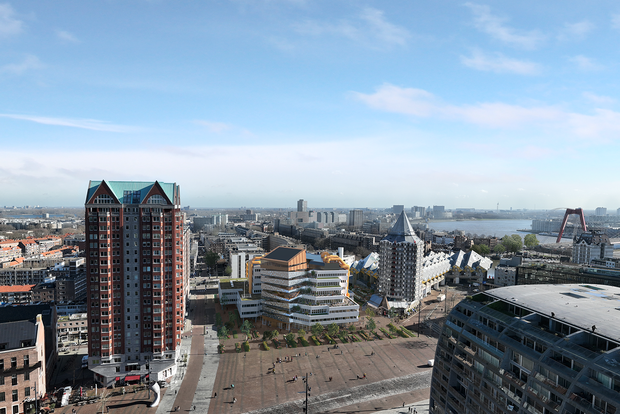 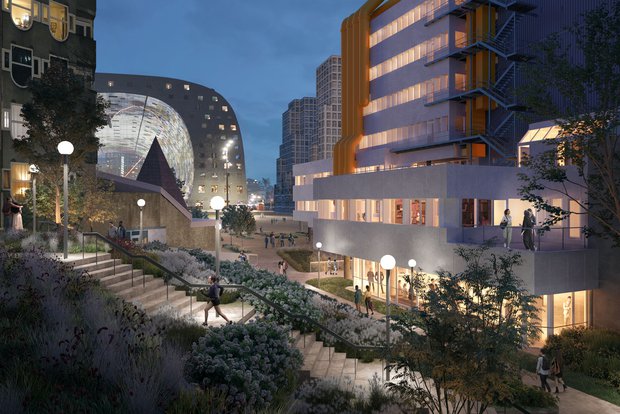 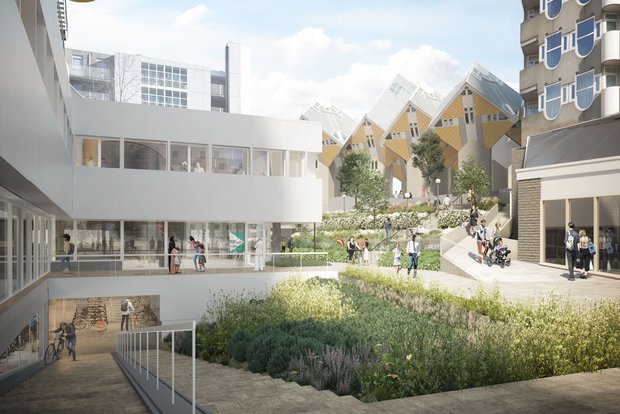 The interventions proposed in the design in terms of sustainability are clearly recognizable and visible to visitors and users. Starting with the water roof, with water on top of the atrium that ensures that sunlight is filtered. The water on the water roof will stir more or less depending on the tide. What is the water doing? Is it low tide or high tide? It draws attention to the theme of water, so enormously important in Deltaland Netherlands and in port city Rotterdam. Other visible sustainable interventions include the greenery that extends from outside to inside, the new tower made entirely of wood, the green/blue roofs with solar panels and the roof terraces. In addition, the library will have an entirely new facade that will provide good insulation for the building. An innovative circular screed will be applied. We want to use this to make the reuse of certain materials from the existing library visible to the public. For example, you can think of reusing the glass from the existing facade in the screed.

In the current library, the bookcases are placed along the facades which extremely block the daylight. In the new design, the areas along the facade and around the new atrium are left free so that use can be made of natural daylight. In addition, the sloping glass balustrade will reflect the light through the building. The design for the Rotterdam Library is maximally climate adaptive. Through various water retention facilities and heat stress measures, the building can anticipate times of more intensive precipitation and longer periods of high temperatures due to climate change. For example, heat stress is prevented by replacing the existing roof with a green roof, which not only absorbs water but also heat and slowly releases it. Greenery and planting provide biodiversity for the area. We have also thought of insect hotels, nesting and hiding boxes for bats, sparrows and swifts.

The Municipality of Rotterdam has now announced the winning team. The consortium, led by Powerhouse Company and two Norwegian architectural firms, will now elaborate the sketch design for the renovation of the striking building into a preliminary and then a final design.